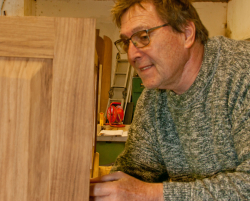 Mike Lillyman
Mike has always loved spending time outdoors with the quiet and the trees. Bonus points are always found when he comes across a cute animal. This has naturally led him to a career working within the forest, and with the wood it produces. He loves being able to share that knowledge with others and make sure they start off on the right power tool.

Boxelder is the third corner of the Soft Maple Triangle. The lightest and, sadly, the weakest of the Maples, however, it does have some excellent and endearing characteristics.

I’m always a little wary of common names for different wood species. It creates confusion, so if you come across Manitoba Maple. Ash-leaved Maple. or Boxelder Maple are all the same species. So let’s settle on Boxelder for now.

To those of us who were cajoled into using the Latin names, Box Elder is called Acer negundo, and the species is found around the Great Lake States to the central Atlantic States and from the Northern Florida region all the way to Southern New England.

The Pioneers favored Box Elder because of the trees’ quick growth rates and drought-resistant qualities. They were planted originally to serve as windbreaks and to assist in preventing soil erosion.

There are several Box Elder wood uses, and to many of us, it served as the welcoming card to the world of woodwork. With its easy way of working, great value for money, and the perfect medium to carve and make simple items such as boxes and toys, it is an ideal welcoming medium.

Boxelder is a lightweight member of the Soft Maples. The wood is light, soft, and easy to work. The grain is straight and finely textured, and the difference between heart and sapwood is minimal. The cost of the lumber is low and working with it poses few health risks.

The stability of the Boxelder wood is on the low side but adequate for items like small toys, boxes, food containers, and treenware. However, this is not wood for outdoor use because of its low durability and resistance to insect infestation.

Boxelder is a lovely wood to turn, and beautiful grain patterns are visible with red streaks caused by the fungus (Fusarium negundi).

The lumber’s brittleness must be considered when working with Box Elder, but apart from that shortcoming, it is an ideal wood for first-time woodworking projects.

What To Look For When Buying Boxelder

Boxelder is often mixed with the other soft Maples, like Silver or Red Maple, when sold. You may be lucky and find a retail outlet that does separate the soft Maples, but that would be limited to areas where the Box Elder trees are prolific.

The attraction of Boxelder is the price, but this is restricted to boards that don’t have the red streaks caused by the Fusarium negundi fungus. Boards that display the gorgeous streaking command a higher price, sometimes three times that of the blander boards.

Spalted turning blocks are sought after because of the natural beauty of the red streaks used for turned objects. Specially selected burl blanks are also available for turning pens.

Where to Buy Boxelder

CAG Lumber in Gainesville Ga has a selection of red-streaked and bland boards available. The price for the boards with red streaks is over three times that for bland boards. They ship throughout the USA. Their online catalog contains both exotic and domestic timbers.

Situated at Klamath Falls, Oregon, Cook Woods has an impressive array of Boxelder boards and blanks for turning. In addition, they offer free shipping for orders above $ 75.

While Box Elder has minimal support for making Charcoal, it is an excellent wood for smoking meats and produces a lovely even coloring and a mild taste.

You can also get syrup from boiling down the sap of the Box Elder. Maybe not quite as much as from the more conventional sources of Maple Syrup, but still worthwhile, and the taste of the syrup is highly rated. Be prepared to work with a ratio of sixty-five to one of sap to syrup.

Box Elder is a great wood to make kindling. It burns easily and quickly, so it is ideal to use to start a fire. Sadly, it burns too quickly to make it a useful timber for a long winter’s night as you will probably generate more heat by frequently getting up to feed the fire.

Because Box Elder trees are weak and often become casualties of winter storms, you may well be able to source a supply of firewood for no cost. Unfortunately, there is a cynical view that suggests that is the value of Box Elder as firewood. I don’t think that is fair. Yes, it does burn quickly, the heat is not great, and it will produce a significant amount of ash, but you could do a lot worse than using Box Elder.

On the plus side, it is an easy wood to split, and provided the tree is felled in winter when the sap content is low; it will season quickly.

Another advantage is that Box Elder is a well-behaved firewood emitting few sparks and little smoke when properly seasoned.

However, a note of caution is that wet Box Elder produces an unpleasant odor, so make sure your wood is dry before using it for the fire.

Comparison of BTU values of Maples

Box Elder is a lovely wood to begin gaining confidence on the lathe. It is soft and forgiving and yet can produce a good finish. The significant advantage is once you have acquired enough skill, you can try your hand at turning a piece with the gorgeous red streaking in it. You may have to pay a little more, but the grain patterns are beautiful.

Once you have mastered turning bowls on the lathe, the next step is to add some utensils like spoons and forks to your repertoire. The truly remarkable thing about Box Elder is the almost effortless finishing. There is no need for extended sanding as the wood finishes beautifully, provided you keep the chisels sharp.

Box Elder is light, so toys for children are a great way to show your imaginative skills. In addition, the softness of the wood makes it an ideal medium to use a scroll saw and cut intricate shapes that fit together for children. This is an excellent opportunity to combine carving and cutting skills.

My favorite items are string puppets. They can be as simple or complex as you wish, and kids will happily forsake the TV screen and produce their own entertainment.

The price of Box Elder makes it a good choice for utilitarian objects like boxes and crates. While the softness of the wood and its limited durability does limit its use, it is acceptable for making small boxes and crates.

Adding a protective coating to the timber will make it far more durable and serve to deter all but the most determined of insects.

Other Maple species commonly bracketed together as the Soft Maples share many characteristics with Boxelder.

All the alternatives are good substitutes for Box Elder when contemplating smaller projects and turning items. Box Elder has the advantage in the beauty stakes when possessing red streaks, although all the other species have similar constant and attractive grain patterns.

Question: How is the BTU heat rating calculated?

Answer: The British Thermal Unit of heat is usually given in million units when it pertains to firewood. It is the total amount of energy a firewood cord will produce. The BTU reading is probably more valuable as a comparative figure to suggest the quality of firewood.
For example, Apple has a high BTU rating of twenty-seven million BTU compared to Box Elder’s rather dismal, showing just under eighteen million BTU. From this, one can deduce that the heat production of a Box Elder fire will be substantially less than that of a fire made with Applewood.

Question: What causes the Red Streaking in Box Elder?

Answer: Various theories about the cause of the Red Streaks are found in Box Elder. While it appears that the fungus that attacks the wood could cause the red streaking, this has not been confirmed. It is also suggested that the red streaking is caused by the reaction of the tree to stress, and this theory tends to have a fair amount of support.

Whatever the cause of the red streaking, the resultant beauty of the wood is keenly sought after.

Question: Should Box Elder be used for Furniture pieces?

Box Elder always reminds me of a puppet I made so many years ago for my children. I was finding my way on a new lathe, and the pieces were not the best, but they were fun.

We spent hours finishing them off, painting Pinocchio with a bright red jacket, and the children’s imagination was only limited to the other puppets’ color schemes.

It reminded me that we don’t always need the top-tier woods for many of our projects. Sometimes the down-to-earth and honest species will be just as good, and Box Elder is just one of those species. No pretension, just an honest, easy-working wood.